Libelium Releases the First Programming Cloud Service for the IoT

The company grows its product portfolio with software services to give intelligence to its sensor devices. The new service allows to program IoT devices from the Cloud in just minutes without code writing experience.

Today, at Smart City Expo in Barcelona (Spain), Libelium presents for the first time a cloud software service to enhance its wireless sensor platform with intelligence based solutions. The Spanish company has released the first Programming Cloud Service that will reduce development costs, increase security and speed up the time to market of Waspmote and Waspmote Plug & Sense! users by removing both the code training and the “try and test” stages in the deployment process.

On the one hand, the new service facilitates the access to develop new IoT projects to technology companies that do not count with a special engineering team for the IoT. On the other hand, the new Programming Cloud Service is thought too for those companies that want to save time and resources getting the IoT technology ready for their applications. 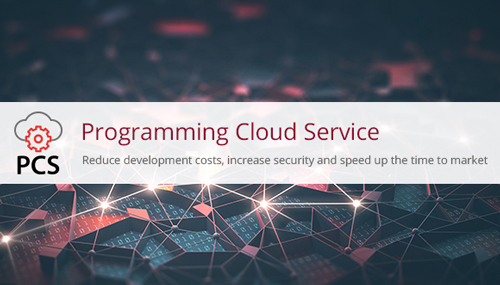 The new strategic tool allows to create binary files for the Libelium’s Plug & Sense! sensor nodes in minutes by just filling in an online form with all the working options like sleeping cycle, data to include in the sensor frame, Cloud destination URL, networking options, etc.

“After more than 10 years of experience in one of the most complete IoT programming API’s in the world, we have realized that our clients looks for simplicity: they just want to use the full programming potential in one click. This is how we came with the idea of relaying all this complexity to a Cloud service that could create code and compile it for them in seconds”, David Gascón, Libelium’s CTO, points out.

Due to the importance of the security in the IoT, it is crucial for companies managing real deployments to have the ability to configure nodes correctly and easily with the appropriate encryption options.

The Programming Cloud Service creates the binary files based on solid and tested source codes generated during years by the Libelium engineering team. Then it generates the algorithm specified by the user and compile it on the Cloud using the last version of the API and libraries. This way users may be confident that all the binaries generated contains all the improvements of the latest API versions.

“Smart Cities projects based on IoT need less costs and more simplicity on development stages to see the light and Libelium is working in both objectives to ease the IoT really take-off”, Alicia Asín, Libelium’s CEO.

With this launching, Libelium offers different types of licenses for small, medium and large IoT deployments. Licenses titled as “Basic” and “PRO”, that enable the management from 5 to 20 nodes, are perfect to create binary files one by one. Besides, “Elite” licenses allow to create up to 100 binary files in batch by just one click.

With the new service no SDK’s, API’s or compilers are needed anymore. “Now you can program the sensor nodes using a mobile phone or a tablet, as just a web browser is required to fill the programming options form”, Libelium’s CTO says. Anyway, the libraries and compiler keep accessible for experienced developers who want to keep coding and using all the API options and the flexibility of programming their own binaries.

In the near future, Libelium will offer on its cloud services platform new licenses for the management of MySignals users’ data as well as for programming other devices such as Smart Parking.