Natural environment is of crucial importance for social and economic life as it is used as a resource for food supply, an energy source or a major source of medicines. In the past, human interaction with nature, although often having a disruptive effect on nature, often also enriched the quality and variety of the living world and its habitats.

Today, however, human pressure on natural environment is greater than before in terms of magnitude and efficiency in disrupting nature and natural landscapes. The expansion of humans activities into the natural environment, manifested by urbanization, recreation, industrialization, and agriculture, results in increasing uniformity in landscapes and consequential reduction, disappearance, fragmentation or isolation of habitats and landscapes. Therefore, more animal species are disappearing every year or are in danger of extinction, as it can be seen in Figure 1, which shows the total number of known mammal species and the total number of threatened mammal species.

Governments spend a huge amount of money to preserve natural environments every year through different programs such as European LIFE program. As it can be seen in Figure 2, European Union expenditures in natural resources are around 11% of its budget (€ 15 billion). All these efforts are helping to keep some species out of danger though many others are still in danger because their habitats are being destroyed or even because some of their special characteristics are unknown. Therefore, more resources should be allocated to investigate these species in order to protect them from natural environment changes produced by humans.

In addition to governments, there are several organizations created to preserve nature and animal species such as World Wild Life (WWF), National Wildlife Federation or Greenpeace. These organizations have substantial resources (WWF budget is over 200 million dollars) that are used to preserve ecosystems and ecologically important areas all over the world.

Wireless Sensor Networks (WSN) can help to monitor environmental conditions within these areas, ecosystems or habitats of different species, allowing an easier, faster and cheaper data logging, which will lead into a better utilization of resources of each organization or government.

QUIROTEC system has been developed by Wireless Galicia, a Spanish company focused on wireless communication systems, and this project has been deployed in the National Park of Atlantic Islands of Galicia. This system is able to monitor several parameters (Temperature, Luminosity, Humidity and Ultrasounds) to study the habitat of bats and to determine whether bats are present within a specific area. 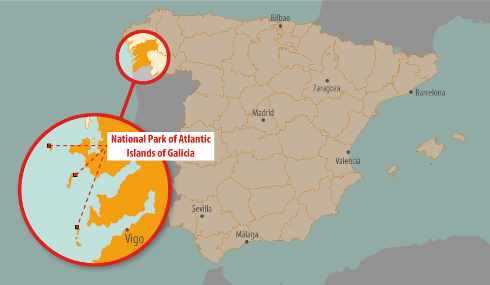 QUIROTEC is aimed at monitoring and studying the habitat of bats using wireless sensor networks. It is a multidisciplinary project in which new technologies will encourage the acquisition of data for the study of the presence and relative abundance of bats out of their shelters and the variables than can explain this fact.

Integrating ultrasounds sensors along with environmental sensors such as temperature, humidity or luminosity, will allow to monitor these parameters in a large number of places and for a long period of time. Bat specialists will take advantage of this powerful tool by consulting the data without having to invade the environment in which bats live.

The presence of a bat in a place depends on the time, temperature, precipitation, humidity, atmospheric pressure, wind speed, luminosity and presence of food. As a whole, these parameters establish the different variables that explain the bat presence in a specific location. QUIROTEC will measure some of these parameters in order to help scientists to determine the conditions that provoke bats to live in a concrete area. 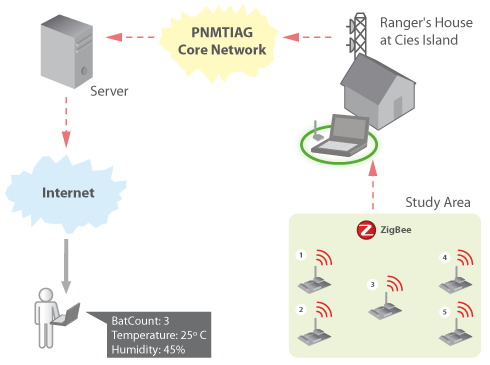 QUIROTEC motes use Waspmotes and have been deployed in several locations within the National Park, measuring different parameters:

These sensors are connected to Waspmote through its analog inputs (temperature, humidity and luminosity sensors) and through an special board designed for this project. An ultrasonic microphone, which has an operating frequency close to bat’s frequency (45KHz), is used to detect the presence of bats.

Fig. 5.- Distances reached depending on the protocol

So we can reach up to 40 km with Line of Sight (LOS) condition using the 868MHz module. It is also possible to transmit the data via GPRS/3G, as a secondary radio module for better availability and redundancy in situations when it is critical to ensure the reception of the message. The GPRS/3G module is quad-band (it can operate in 4 different bands, so it supports any cellular connection provider), making it able to work all over the world, therefore this project we are describing is suitable for any country.

For an accurate measurement, sensors have been calibrated in professional laboratories in order to provide the best results in this project. On the one hand, environmental sensors have been calibrated and their output has been checked in order to assure a correct behavior of the whole system. On the other hand, ultrasounds sensor was developed along with a special board in order to return a different value whether the presence of a bat is detected.

Waspmote, sensors and battery were placed inside an IP66 enclosure to be able to be placed outdoors. As the location is an island, these nodes are being exposed to the sea salt corrosive properties for a long period of time. A large amount of tests were carried out in order to check the correct behavior of the system in this scenario.

Fig. 6.- Waspmote and sensors placed inside the enclosure

These nodes are sleeping during the day, consuming only 62uA, and start monitoring at dusk. By default, parameters are obtained every minute though this time is configurable. QUIROTEC nodes are powered by a lithium battery which is recharged by the solar panel. Taking advantage of Waspmote’s saving energy features and solar energy, these motes are autonomous.

Fig. 7.- a) Waspmote powered by a solar panel. b) Pipistrellus pipistrellus (bat)


Sensor data is sent to a central node that gathers all the data and stores it in a database. This database is accessible from any computer authorized thanks to a WiMax network previously deployed by Wireless Galicia. In this way, a scientist can access the sensor data from its laboratory without having to move to a specific location.

As a result of this project, environmental conditions within bat’s habitat can be monitored in order to study its main characteristics and understand why this specie lives in a concrete location. A better understanding of the conditions required by these animals to live in a specific area will lead into a better preservation of this specie and a better co-existence with humans.

More information about the project and its deployment can be seen in the following video: