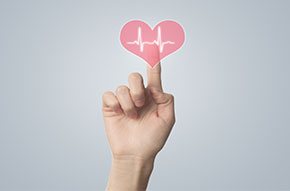 Pneumonia is the number 1 killer of children worldwide with 2 million deaths each year. With a child dying every 20 seconds, pneumonia is a significant contributor to neonatal mortality in developing countries – more than AIDS, malaria and measles combined.

The illness is treatable and preventable, but accurate early detection is key.

To reduce child mortality due to Acute Respiratory Infection (ARI), the Smart Object Sensing Array invented by Guardit and licensed by Inspire Living Inc., contracted with the global NGO Project HOPE to create a device to aid in the efficient detection of tachypnea, an indication of pneumonia in children, based on Libelium’s e-Health Sensor Platform. 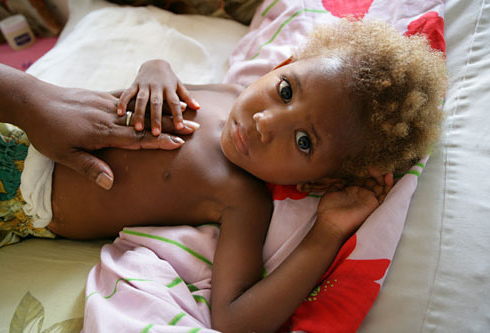 An Affordable Prototyping Platform for e-Health

Creating new healthcare applications or medical devices requires access to prototyping platforms that were once very costly to obtain, limiting development to research labs or well-funded corporations. “One of the challenges to e-Health innovation has been the lack of affordable sensors. You had to make a huge investment even before knowing if your project was viable. That is why we developed the e-Health Sensor Platform”, said Alicia Asín, CEO and co-founder of Libelium. “When you see all that can be achieved with an inexpensive prototyping platform like ours, it makes it worthwhile for makers to change things.”

Inspire Living built the INSPIRE prototypes using Libelium’s e-Health Sensor hardware platform. “Libelium knocked it out of the ball park with their e-Health Sensor Platform Kit. With this, we had available the core of what we needed so we could add our value and focus on our solution. Libelium developed the foundation in software for us to build on; they had the hardware compatibility and conformity so that others could understand and reference our solution, and accept our design decisions more easily”, said Michael Script, co-founder of Inspire Living. “I would sum up the impact of working with using the products, services, support and forums from Libelium as game-changing.”

Figure 1: The e-Health Sensor Platform with its array of sensors, electronics
and software APIs 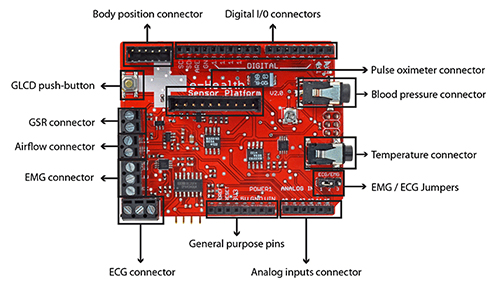 After years of development and hundreds of iterations, Inspire Living, an innovations company specialized in smart object sensing with portable notification, was close to launching a new sensor system for counting breath rate for use in developing countries. They had patented a sensor and sourced a special material that could adhere to a child’s skin to keep the device in place. They had created easy-to-read icons to start the device and display the number of breaths counted; they had devised a way to manually charge the device for autonomy, for use in places where batteries and sunlight were scarce. At last ready to show the device to the world, they set out to demonstrate it to the World Health Organization (WHO), UNICEF, USAID, Project HOPE, and the Gates Foundation.

As the company prepared to meet the non-governmental organizations (NGO), Inspire Living’s co-founder, the inventor Michael Script, received a call from a friend who had a mobile application that could count breath rate. Script had to try it. He tested breath rate with the smartphone app, compared it to readings from his own sensor, and in the process discovered a new parameter to take into account – one that had been overlooked previously. Script dropped everything to spend the next two weeks writing another patent application for a completely new device, with an important difference. Those impromptu tests had convinced him that an entirely new approach to the problem was required to ensure accuracy in all situations.

In developing countries, aid workers and medical professionals use counting beads and stopwatches to test breath rate: this can lead to misdiagnosis by either under-counting or over-counting. A moving child, difficulties in remembering the count, or distractions during the count are all factors cited by UNICEF as major impediments to accurate respiratory rate counts. 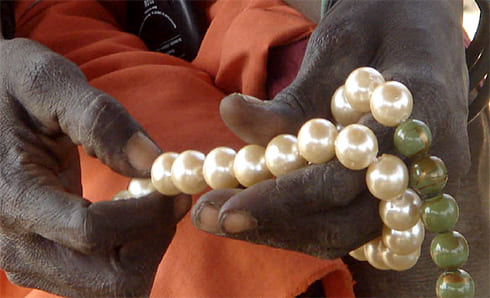 Figure 3: Counting breaths with beads and stopwatches is common in the developing world

Script understood the complicating factors in play. “The problem with obtaining accurate readings while monitoring breath rate is that the body settles, and while settling from one position to another breath rate is affected. The mere act of speaking can lower your breath rate to 7 ppm. If the body is settling, you never know when it’s finally stabilized to take a breath count. You need to have a digital system modified with an algorithm to compensate for this breathing anomaly”, said Michael Script, inventor and co-founder of Inspire Living. 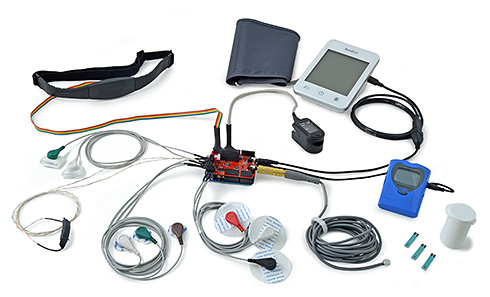 Script, an inventor with a long career, found that Libelium had developed an e-Health sensor board integrating a number of different health tests performed on one device, available through Libelium’s DIY hardware division, on the Cooking Hacks website. The e-Health sensor platform includes a spirometer, a pulse oximeter, sensors to measure blood pressure, temperature, body position, and it can monitor a number of biometric parameters. 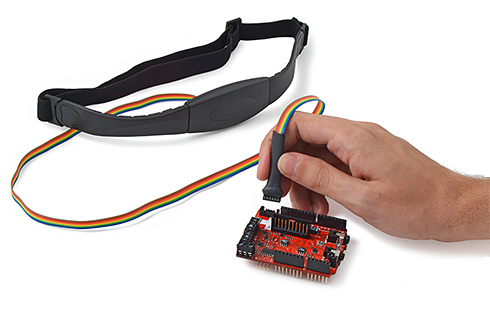 After receiving the e-Health Sensor Platform from Libelium, Script assembled a new system and began testing. Within days it became clear that input from more than one sensor would be needed. Script and his team started linking the other sensors’ inputs together, linking body position and heart rate to breath rate. Next, they added galvanic skin response to body position and temperature to breath rate. And, after developing various algorithms, the Inspire team found what they were looking for. They could accurately count breath rate.

The Inspire team integrated their sensor with the Libelium e-Health Sensor Platform to develop a more sophisticated diagnostic system for clinics and health professionals in developing countries. They brought the new device to a meeting in New York City of the largest NGOs. “As you would expect, most were mollified by our presentation. It was not to be believed”, said Script. After several clinical trials, visits to pediatricians and pulmonologists, more clinical research and a lot of focus “we are ready to assist health professionals deliver the breath of life”, he said. 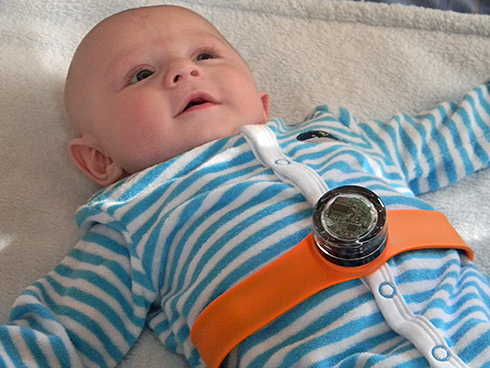 Inspire Living’s initial requirements were to build a better diagnostic for children with pneumonia in developing countries for use by healthcare aides with no education or limited medical training. 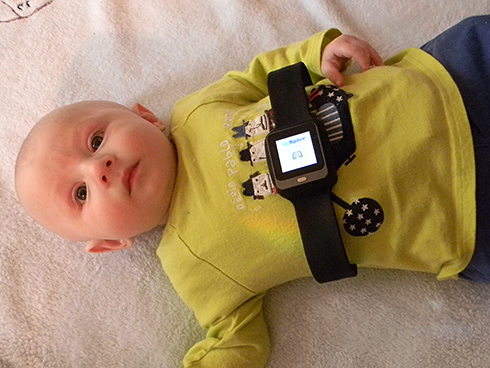 Figure 8: Demonstrating ease of use of INSPIRE in respiratory screening tests

The INSPIRE device replaces the outdated methods used by health workers up to now. Currently, measuring breath rates involves nurses and doctors counting using a minute timer or even using beads, methods that are susceptible to errors and could cost a child the chance to receive medicine in time.

Figure 9: Breath rate testing can be done on any child in any position, whether sitting or lying down

The INSPIRE device measures patterns of breath recognition with an algorithm that analyses the data and displays the information to be easily read by non-skilled field personnel. The device tests breath rate in 15-second intervals and can conduct multiple tests within a one-minute time frame, permitting healthcare workers time to observe other signs of patient distress.

A healthcare worker places the INSPIRE device on the child at the sternum, against the skin, and presses the start button; at the end of the test it will beep and display a count. The test may be repeated for assurance. Once the respiratory rate is displayed, diagnostic indications for age and breath rate are provided on the device. The device records the respiratory rate for a given minute. To avoid errors, a chip in the device stores the data, which can be transferred to an external device.

With INSPIRE, the company has addressed many of the evolutions of the product during prototyping, and has now contracted with Project HOPE and other NGOs to take the units into the field and bring back the data they need to take the product to better developments. Clinical trials are ongoing. Results of the field trials will be available from June 2014. 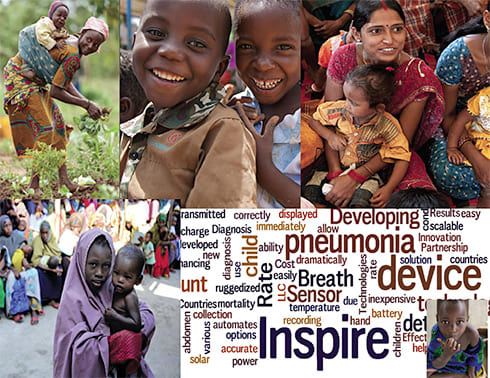