La Emilia is a small village in the North of Buenos Aires, Argentina. Its location next to the “Arroyo del Medio” river has been subject to several flood alerts throughout its history. In 1966, La Emilia was hit by a massive flood after a period of heavy rain leaving more than 400 liters per squared meter and causing two deaths. Local authorities suggested the construction of retaining dikes in order to avoid future flooding. 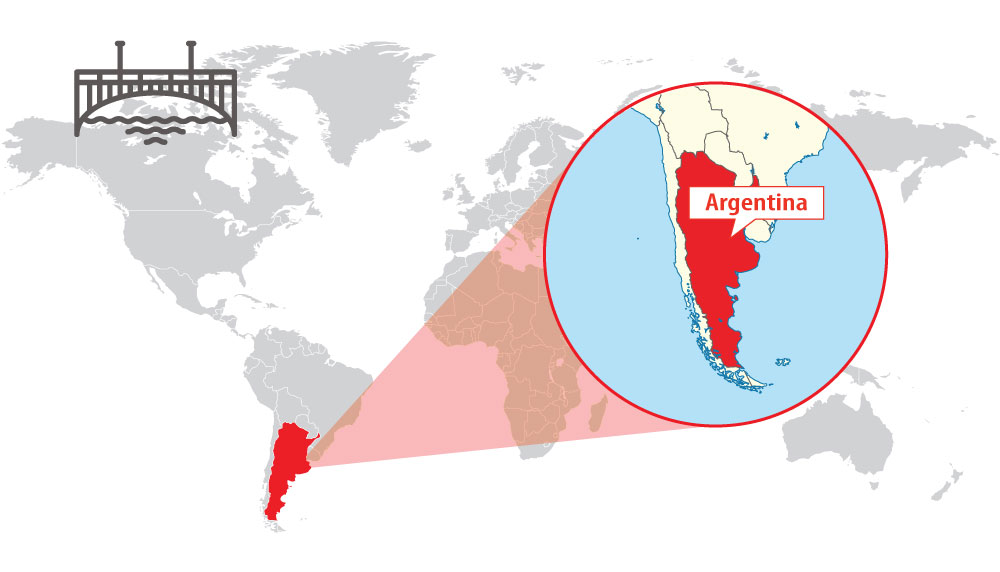 Unfortunately, these infrastructures were neither high nor strong enough to dam the water of the “Arroyo del Medio” during the heavy rains of the austral summer of 2017. On the 16th January, 75% of the population of La Emilia were forced to evacuate, one person died and more than 3,000 people were moved to several evacuation centers. The dikes collapsed and flooded the village, creating a “swimming pool effect” which cut off roads and railways for days.

The local government rapidly implemented a plan to manage flooding and prevent future tragedies. Ideally, the best solution was to regulate the flow rate by constructing a dam upstream. This solution was very costly and would have also affected other areas which would be submerged so was automatically dismissed. Local authorities finally decided to increase the height of the dikes as well as implement an early detection and warning system for flood prevention in the river basin.

Rack2, Libelium’s distributor in Argentina, has implemented the early detection and warning system. This corporation has specialized in IT and telecommunications solutions for more than 15 years and has a growing interest in the Internet of Things sector. Rack2 offers complete IoT solutions thanks to the combination of its Sense2Cloud software platform with Libelium’s wireless sensor platform technology.

Deployment of the project

A preliminary study was carried out by specialists to find out which were the most relevant locations to have sensors installed along the river, from the source to the mouth in the Parana river, with special emphasis on the riverside municipalities. 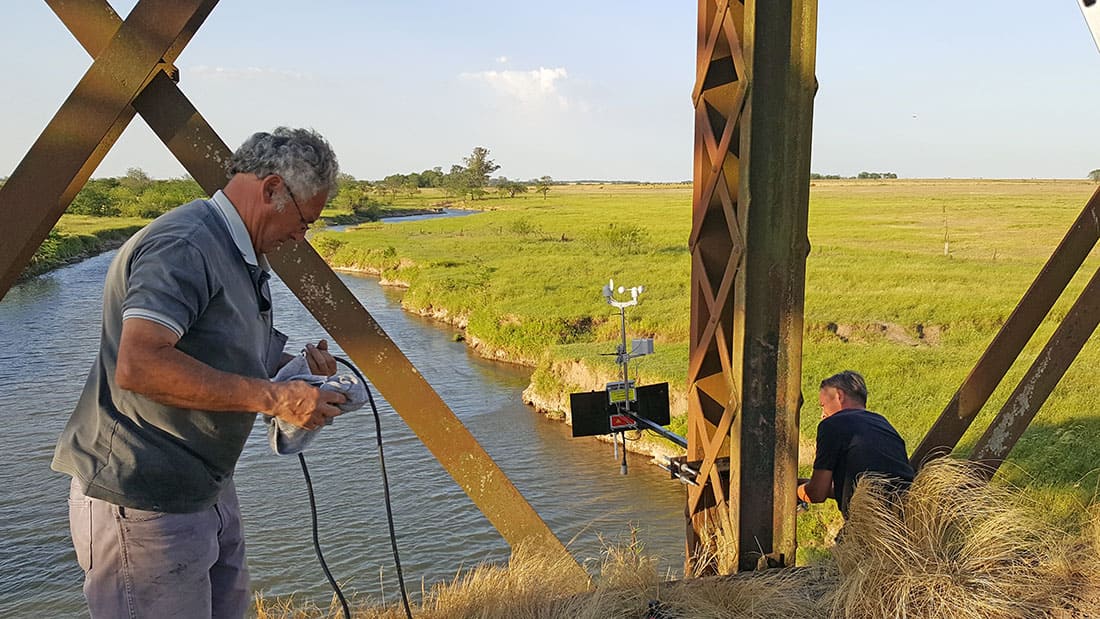 Installation of the nodes at Conesa bridge, Buenos Aires

The deployment of an early flood detection and warning system was the main target of this project, a reliable and stable structure in terms of communications and the accuracy of readings. The Water Authority of the Province of Buenos Aires, required a permanent water monitoring system, not only for risk alerts but also to produce a satisfactory water flow, to control and record its behavior.

The Libelium wireless sensor platform has been installed in four different locations in order to monitor the river: 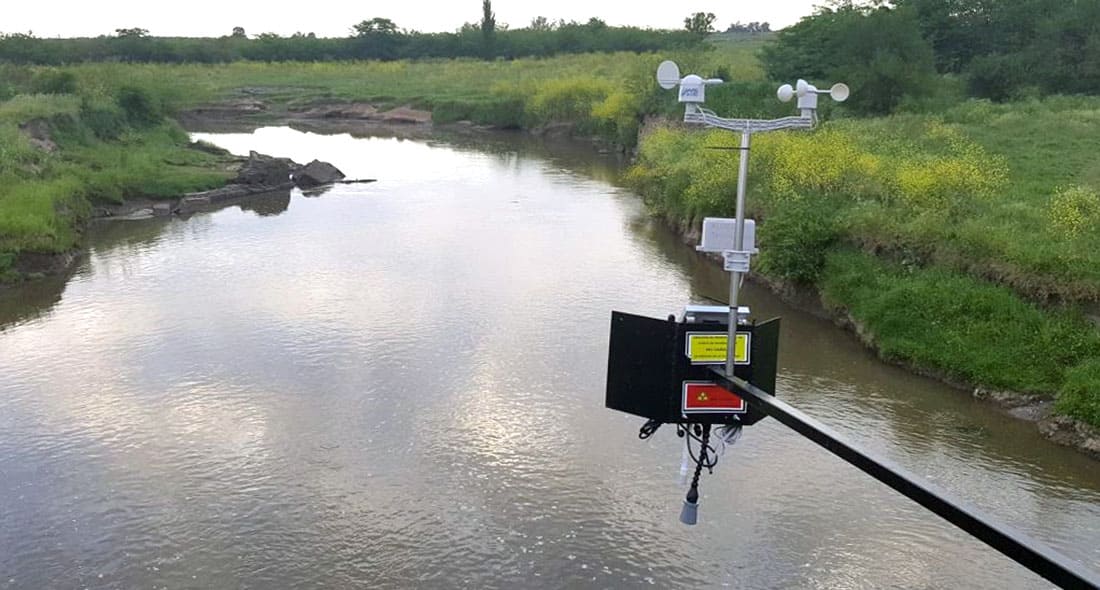 The main parameters to be studied are the river water level and the forecast and observation of the weather using Waspmote Plug & Sense! Smart Agriculture PRO. For that purpose, four units were installed in the area, including the following sensors:

The ultrasound sensor measures the distance between itself and the surface of water. This sensor is frequently used in similar applications, such as measuring liquid level or detecting presence. The sensor emits ultrasonic waves which rebound in the water and offers the system the distance between the node and the water. The water level of the river can be known by applying simple calculations. 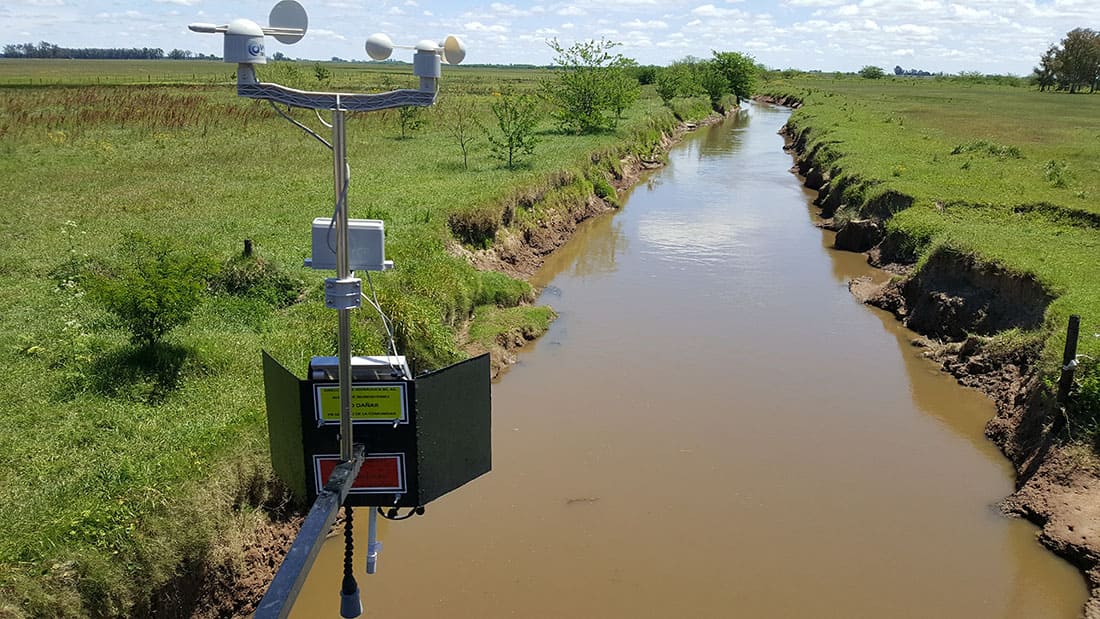 The data gathered by the sensors was sent to the Rack2’s Sense2Cloud platform where it can be visualized and analyzed. The Sense2Cloud dashboard allows the end user to check the status of the sensors every 30 minutes and receive warning alerts in case the parameters’ thresholds are exceeded. 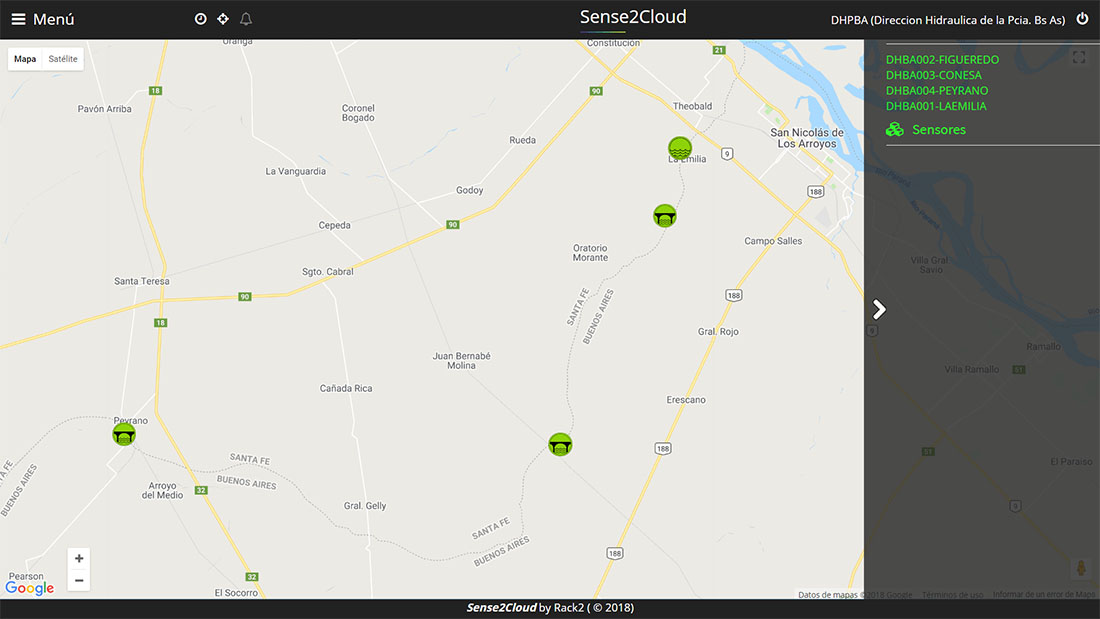 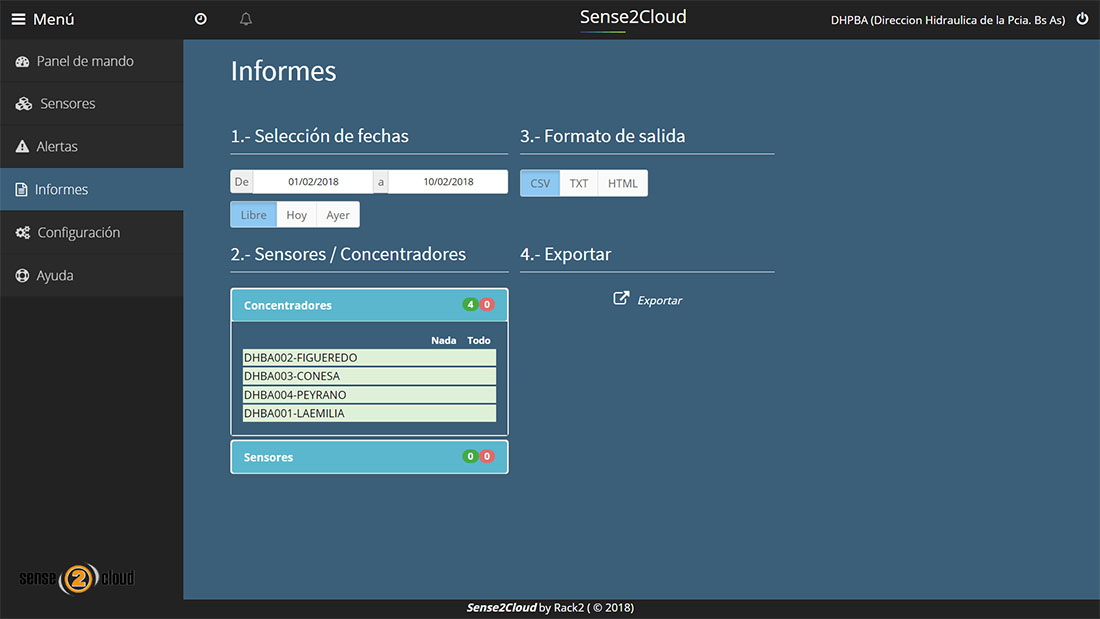 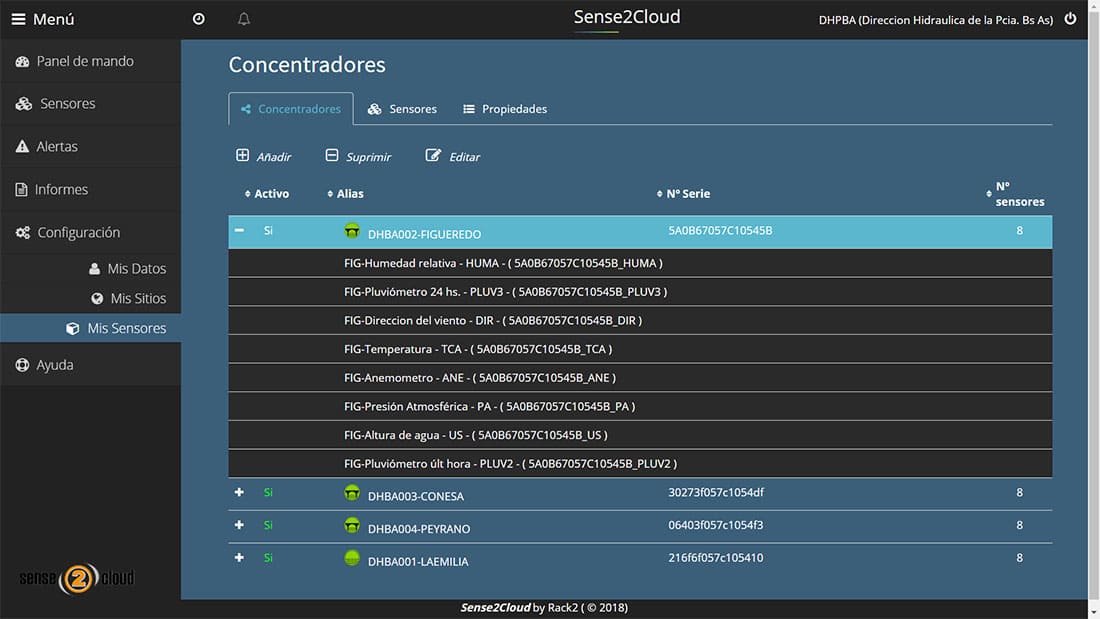 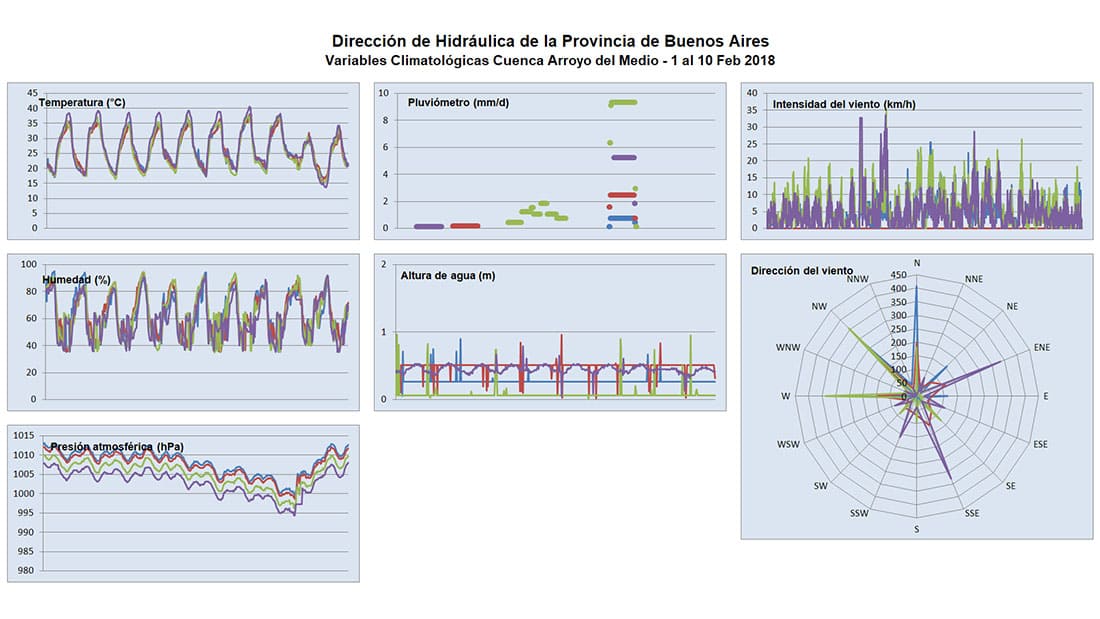 This project perfectly fits the needs of all the stakeholders, the early warning system offers the population real-time information about the condition of the river and additionally, the water authorities have access to data in order to create and study statistics.

Mobile application developed by Rack2 for this project

The program does not have a monetary return on the investment itself, but a project with high political and social impact for the community. The early warning system has been created to solve a problem that the population has to deal with regularly.

Marcelo Silvestri, CEO of Rack2, highlights the fact that “monitoring the river is essential, the possibility of preventing risks and informing the population thanks to the early warning system offers optimal results”.

“Measuring river levels as well as controlling weather parameters was mandatory for the solution. Additionally, the context of the deployment demanded redundant communication protocols to assure the information to be received in the warning center, in case of flooding. Thanks to Libelium’s Waspmote Plug & Sense! features we have achieved both requirements”, says Silvestri.