Libelium participates in an ambitious air quality IoT project for the port of Genoa, Italy

Do you prefer this case study in pdf?

Here you have it!

In the Balearic Islands, knowing that air quality has been a priority for European ports since 2013, they wanted to understand if the ferries and cruise ships that docked in their port polluted more or less than any other factor. Now, Libelium’s IoT sensor platform helps to control the environmental impact in the port of Palma de Mallorca to become a smart tourist destination.
In the same manner, Gdansk (Poland) wanted to know what impact the dynamic nature and importance of maritime transport have in the form of noise contamination, air pollution, and traffic congestion.

In both cases, they used Libelium devices to obtain reliable data that would help politicians make better-informed decisions.

Now a complex and ambitious Internet of Things (IoT) project for air quality in the city of Genoa has sprung up. It entails the installation of two control devices in Porto Antico, a residential, tourist, cultural, and service area in Genoa. One detects weather conditions and the other monitors the main air pollutants present.

Furthermore, this intervention for Porto Antico is part of a broader program to test the enormous potential of the new 5G communication standard by implementing advanced digital services.

Indeed, the main objective of this air quality IoT project for Port Antico is to create a proof of concept for real-time monitoring of air quality. Once completed and tested, can be scalable and installed on a large scale for increasingly smart, sustainable, and healthy cities to live in.

» What has been the challenge of this Air Quality IoT project for Porto Antico?

» Which Libelium solution works in this project? 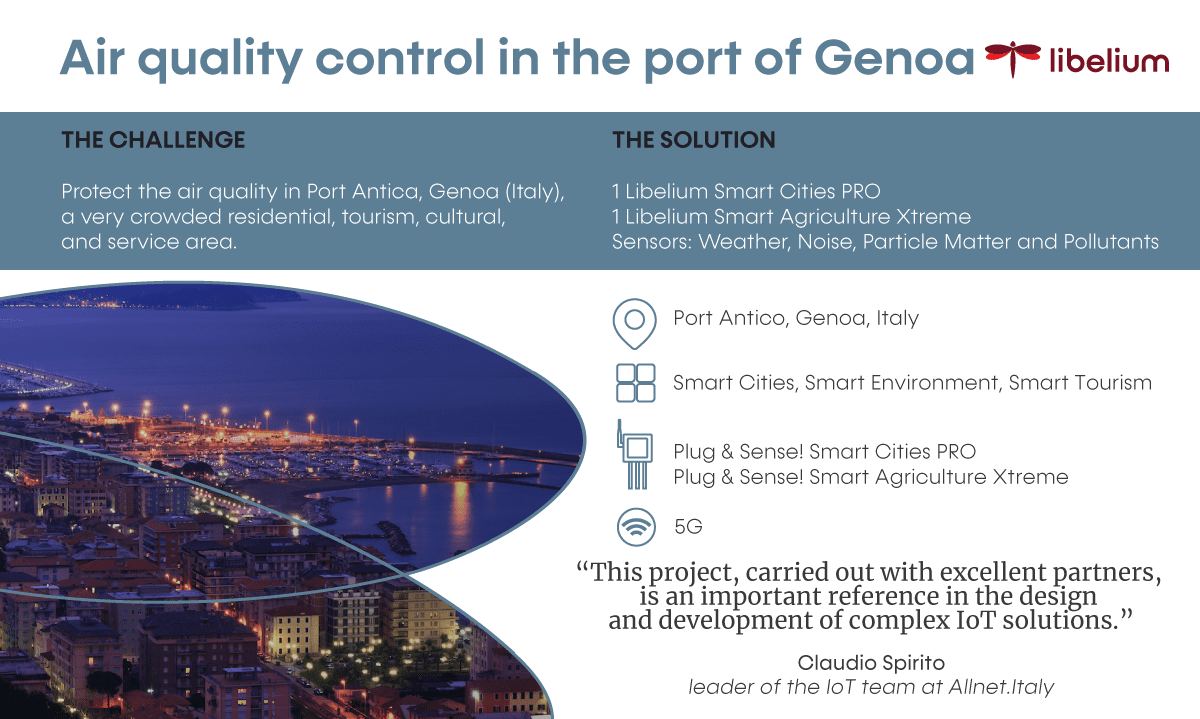 How to get the best IoT solution for the Environment

Allnet.Italia and Axians Italia, a brand of the VINCI Energies Group specializing in ICT, have studied the best IoT solution, capable of responding to the required needs. After evaluating several options, they have opted for Libelium solutions. In this way, two Libelium devices, a Plug & Sense Smart Cities PRO and a Plug & Sense Smart Agriculture Xtreme have been installed in the Porto Antico of Genoa, capable of providing first-rate data quality.

“Libelium is a great partner to work with: they design and manufacture cutting-edge technologies. Libelium stands by the distributor and the customer’s side, to support them and make sure the solution chosen is performing and appropriate ”, says Allnet.Italia.

For this project they used the following technology: 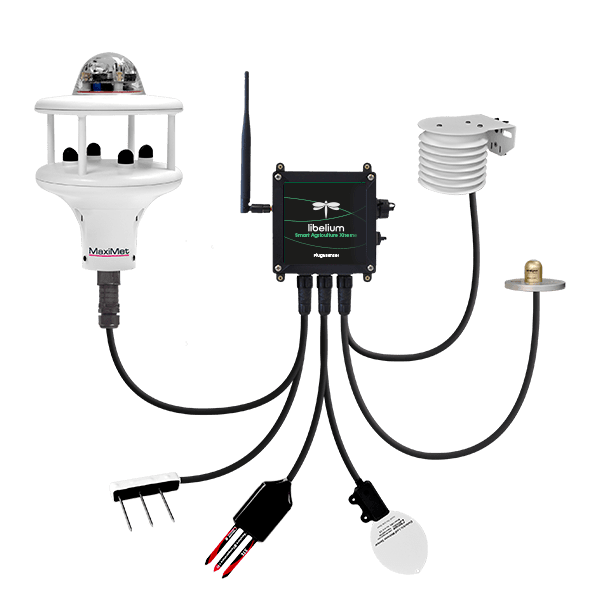 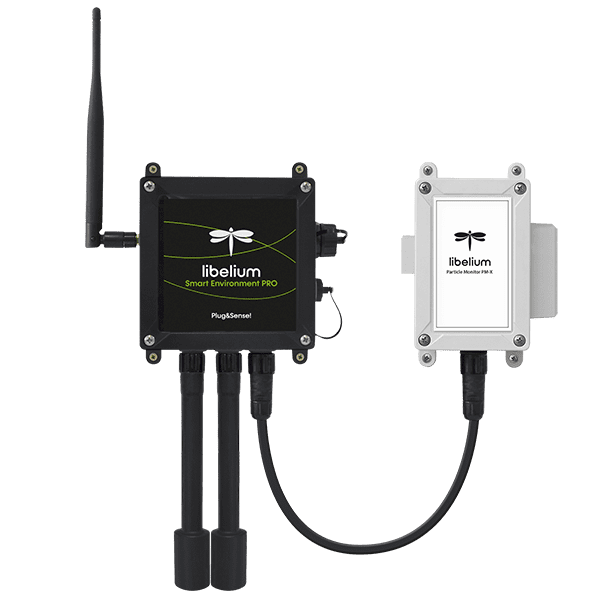 The IoT solution is aimed at monitoring various parameters such as noise, temperature, humidity, and atmospheric pressure, as well as detecting in real-time the main indicators defined by the Air Quality Index (AQI). The two Libelium devices exchange information using the 868 MHz protocol and, through the Meshlium gateway, they transmit this data to a new gateway, which uses the new 5G technology to send the data to the cloud. 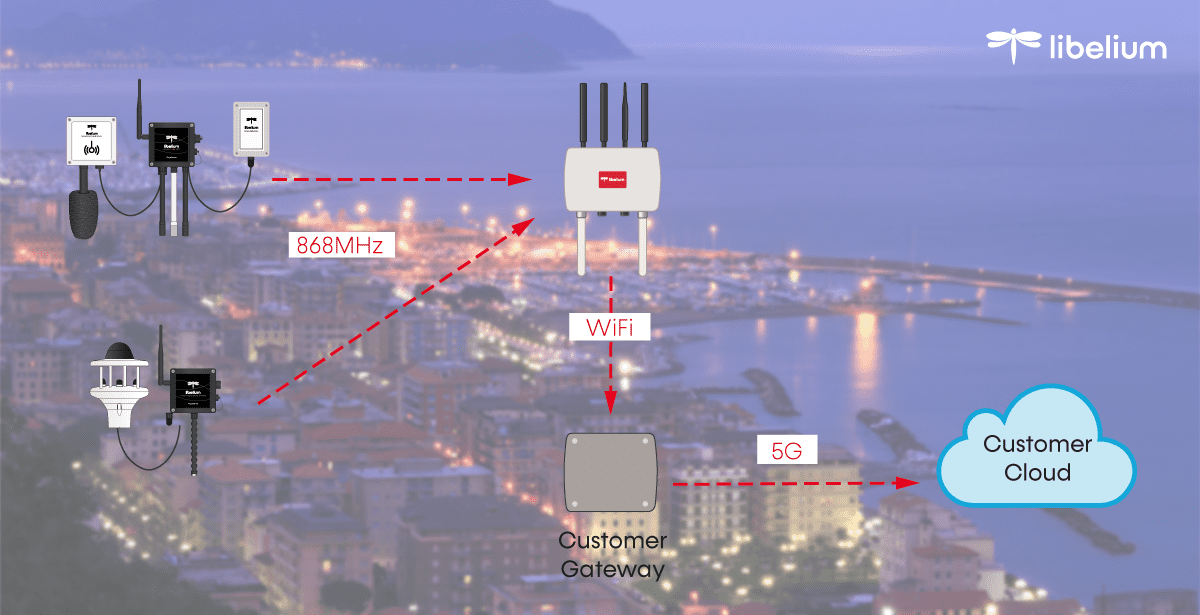 It is now known that, among airborne agents, fine particles (PM2.5 and PM10), nitrogen oxides (NOx), and ground-level ozone (O3) have a strong impact on human health.

Moreover, numerous studies have shown associations between massive PM10 concentrations and an increase in mortality and hospitalizations for heart and respiratory diseases in the population.

In this sense, the meteorological trend plays a crucial role. It is known that prolonged periods of blocked climatic conditions, even longer than 30 days, can cause stagnation of the air with high accumulations of harmful components. Therefore, it is a constant emergency for cities that are forced to implement structural measures aimed at keeping the maximum daily and annual levels of atmospheric pollutants under control, complying with the limits authorized by law.

The main advantage that the Libelium solution is an all-in-one solution for measuring air quality and that these measurements are also highly accurate.

Most importantly, Libelium offers versatility in communication protocols, one of the initial requirements of the project. For example, the project in the port of Genoa required that the installed Smart City and Smart Agriculture devices could communicate with each other and with the Meshlium gateway using the 868 MHz protocol.

This protocol ensured the transmission of data at a greater distance and, at the same time, reduced the environmental impact, thanks to lower battery consumption of the various devices. Also, a further plus of the free frequency is that it does not conflict with existing WiFi technologies, eliminating interferences, guaranteeing high-quality communication.

According to Stefano Soattin, Executive Manager in Axians North Italy: “For us, it is a great privilege to be able to play as a team with Allnet.Italia in a game born under the sign of innovation, in which each team has given its precious contribution to the achievement of a single challenging goal. Implementing a reverse engineering process is by no means trivial, as is being able to count on an agile and punctual distributor of responses, which made a difference in the rapid resolution of particular critical issues that emerged during construction”.

Claudio Spirito, leader of the IoT team at Allnet.Italia, says: “This project, carried out in close collaboration with excellent partners, represents for us an important reference in the design and development of complex IoT solutions. We are very proud to have contributed to this proof of concept that, we hope, will become a reference model for its application in other contexts”.

Both Libelium and its distributor Allnet.Italia are firmly convinced that the “smart cities”, increasingly interconnected and capable of exchanging large amounts of information, represent a valid ally for municipalities to effectively manage their city.

Want to receive this and more IoT news directly to your email?

🔔 Subscribe to our newsletter and don’t miss anything!
You will learn about IoT and how it helps to make the world a more sustainable and efficient place.