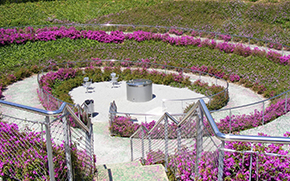 Councils and governments are conscious about the significance of improving public areas. Not only to reduce costs, but also to show their commitment with inhabitants and tourists that visit their cities. This is one of the main reasons why Smart Cities are more than a phenomena, actually they are a reality and the trend that every public institution wants to follow. 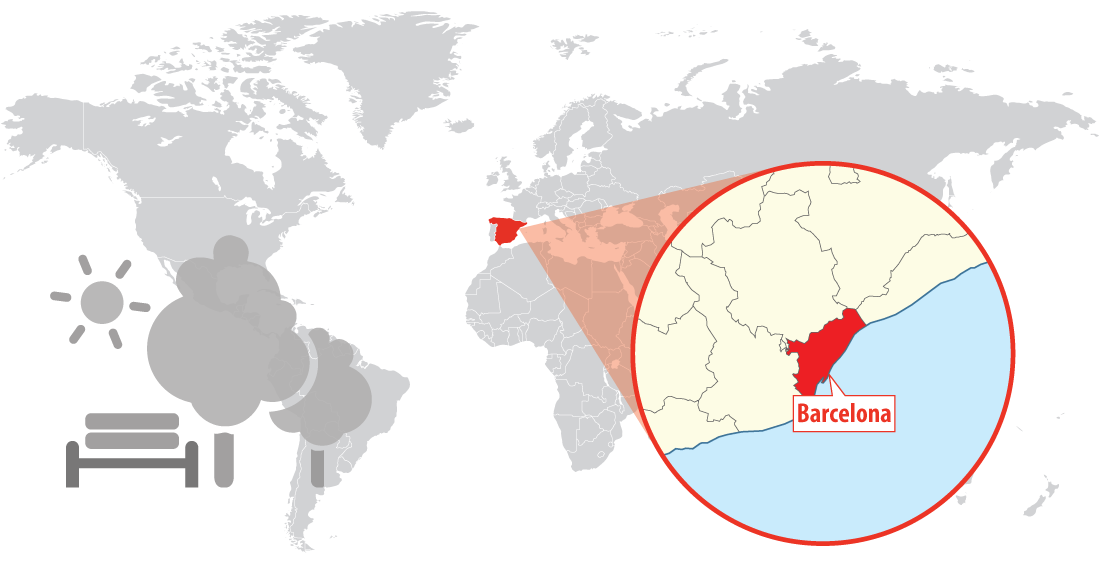 Barcelona is a great example in the Smart Cities field. With different projects to ease citizens lives, it has became one of the worldwide references of innovative and technological developments. With Barcelona Council and Starlab, Libelium has worked in a smart water project to control the irrigation system in Poblenou Park Centre.

Starlab, together with other companies, has deployed a remote control irrigation system for Barcelona that will help to reinforce its Smart City status. Starlab’s contribution to the service is by soil moisture monitoring with in situ probes that use Libelium technology . The deployment is based on sensors technology and consists in allowing remote control of the irrigation system to facilitate the management of the water network.

Before starting the project, each zone of the park was studied and analyzed in order to know their specific needs. The SmartIrrigation system is controlled and monitored thanks to different soil moisture sensors which measure humidity and water flow in strategic points of the area.

The deployed probes datalogger is based on Waspmote Sensor Platform with sensors probes from a third party. This fact gives an impression of the versatility of this device. It enables connection with a wide range of sensor probes that does not have to be from the same manufacturer.

In SmartIrrigation project soil moisture probes are located underground together with Waspmote Sensor Platform, which are put inside waterproof boxes that ensure highly durability. Besides, these devices are powered by a long-life battery with one year autonomy. 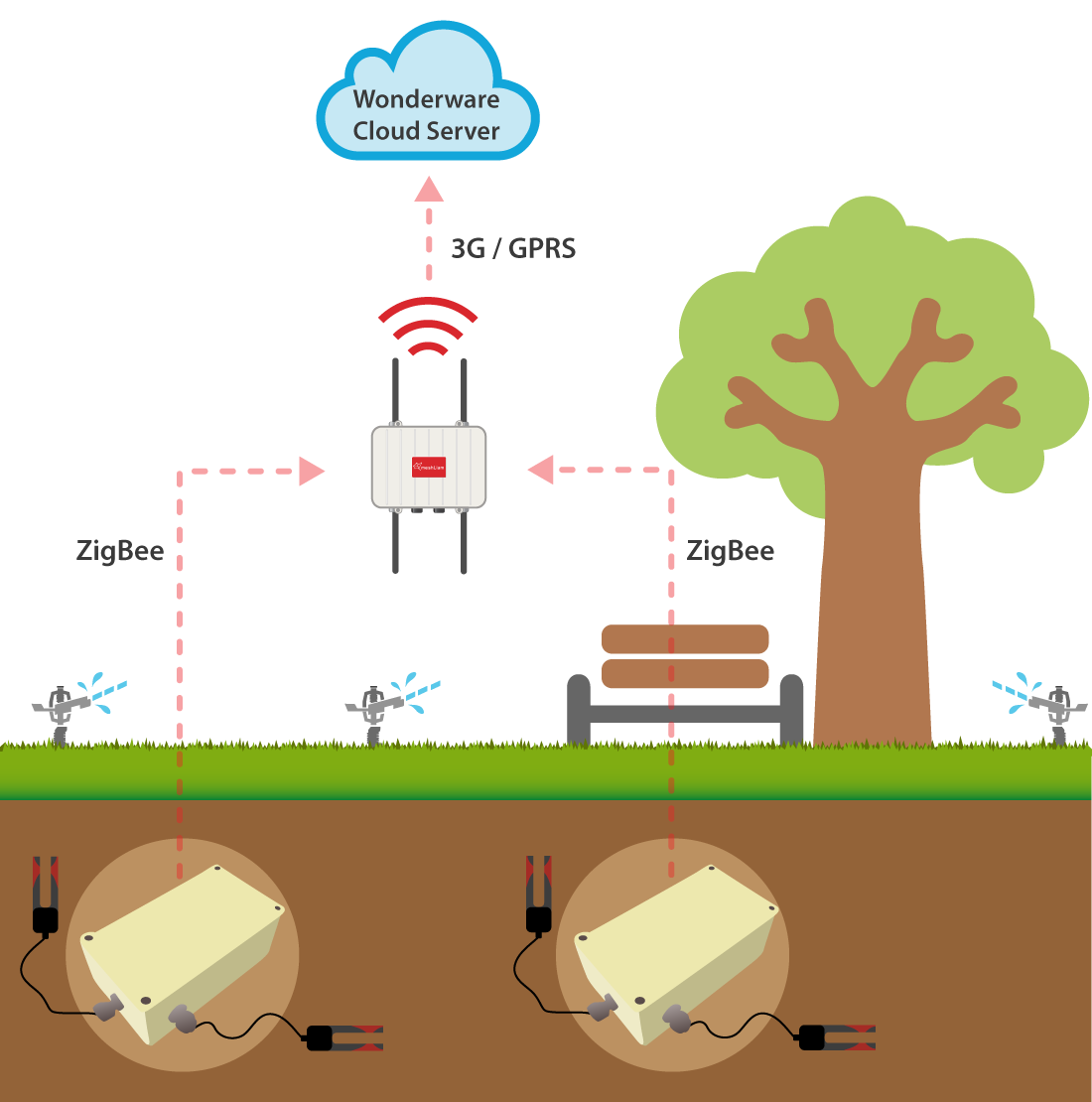 Data gathered by Waspmote Sensor Platform can be sent to a gateway or directly to the cloud. It can be done through several communication protocols, such us GPRS, 3G, 4G, LoRaWAN, LoRa, Sigfox, 868 MHz, 900MHz, ZigBee, 802.15.4, WiFi, RFID, NFC and Bluetooth 4.0. In this project, data is sent through ZigBee to Meshlium Gateway, also provided by Libelium, and from there to the cloud using 3G. All the Meshlium installed are located in the garderner huts to facilitate the communications.

The information collected in the Meshlium Gateway can be visualized in a platform which concentrates and allows knowing the state in each zone. Two departments of Barcelona Council, Urban Services and Computing, have worked with Wonderware to carry out the application which can be controlled with computers, smartphones and also tablets. 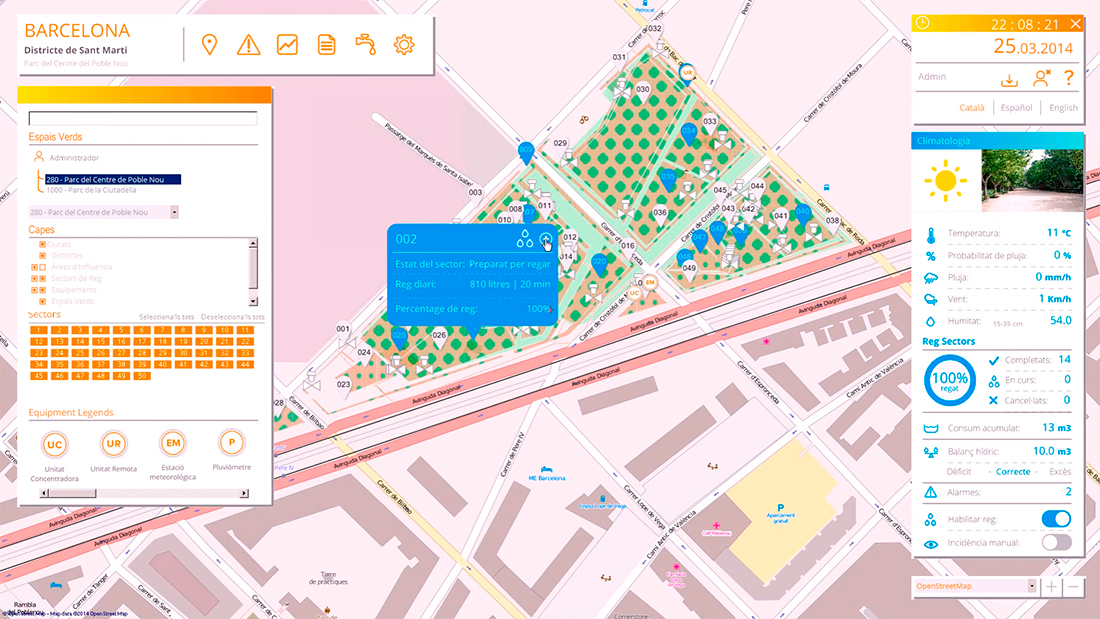 If your are enjoying nature, sitting on a bench or walking through Poblenou Park Centre, you will probably see some members of Barcelona Parks staff and Gardeners using tablets. This is not the way how they spend their break times, the tablets are their new work tools. The new irrigation management system allows an automatic control of the electronic valves that close or open the water flow.

Cutting down water and money

The Council of Barcelona led this project which is part of Barcelona Smart City project. Cristina Vila, General Manager of Water Cycle in the city, considered the deployment as a great success because “the system optimizes water consumption because it irrigates with the proper amount according to weather conditions and the plants’ needs“.

Thanks to this new management system the municipal water bill has been cut down near a 25% in the city. Moreover, this reduction is not just about money, the water usage has been reduced too. Barcelona is saving resources such us water with Internet of Things technology and contributing to enhance the environment too. For gardeners, their daily work tasks has been eased too. Controlling the irrigation system and detecting any incidents that may have occurred can nowadays be checked in real-time.

References of the service: