The creation of the Radiation Sensor Board has been motivated by the nuclear disaster in Fukushima after the unfortunate earthquake and tsunami struck Japan. We want to help authorities and security forces to measure the levels of radiation of the affected zones without compromising the life of the workers. For this reason we have created an autonomous battery powered Geiger Counter which can read the radiation levels automatically and send the information in real time using wireless technologies like ZigBee and GPRS.

The design of the sensor board is open hardware and the source code is released under GPL.

The idea is simple, each node acts as an autonomous and wireless Geiger Counter. It measures the number of counts per minute detected by the Geiger tube and send this value using ZigBee and GPRS protocols to the control point. The system is powered with high-load internal batteries what ensures a lifetime of years.

With this technology radiation measurements can be known in real time without compromising the life of the security corps members as they do not have to be inside the security perimeter in order to activate the Geiger counters. The information is extracted automatically and sent wirelessly to the Gateway of the network. 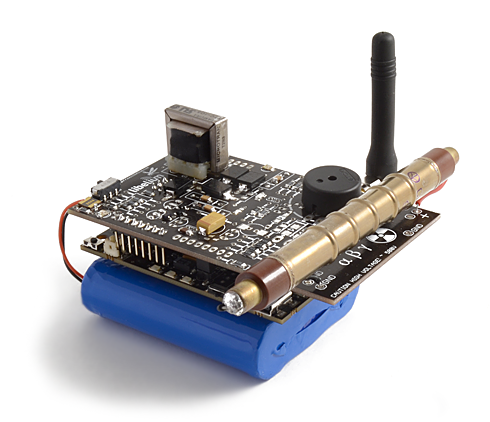 The Prevention and Control Radiation Sensor Network is formed by dozens of sensor devices deployed in the surroundings of the nuclear power plant and reaching the closest cities. Sensor nodes are installed in street lights and threes and take power from the internal battery which, at the same time is recharged using a small solar panel giving unlimited lifetime to the system. The nodes read the value of the Geiger tube during an specific time interval and calculate the number of counts per minute which are generated by the interaction of the radioactive particles. Then this value is sent using the ZigBee radio to the Gateway of the network which stores the information in an Internet data base.

If a radiation leakage occurs in a place where there is not a previously installed radiation sensor network, an emergency deployment can be done in just a couple of hours. Security corps just need to spread the sensor nodes on the ground at certain places. Sensor nodes will take the power from special high load internal batteries which will ensure the control network to be working for months. Each of these points will send the information by using a TCP/IP connexion through the GPRS network or sending SMS alarms when the values are over a certain threshold.

There are two different usages of the Radiation Sensor Board. The first one is explained in a different article, the second one is treated here.

The sensor node is composed by: 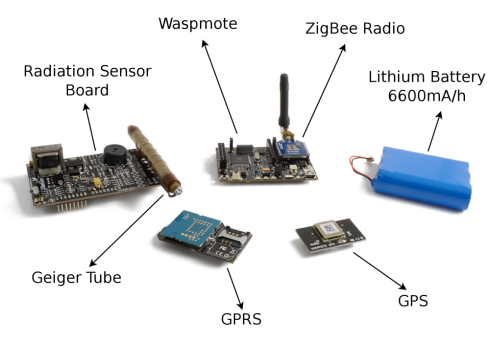 How the Radiation Sensor Network works

Waspmote has a cyclic behaviour. It sleeps most of the time in order to save battery. At specific intervals it wakes up and during 1 minute reads the pulses which are being generated in the Geiger tube calculating the counts per minute. Then it compares this value with the alarm thresholds already predefined. If normal values are found they are sent using the ZigBee radio to Meshlium, the Gateway of the network and the values stored in an Internet data base.

If the values are above the security threshold defined, as well as being sent through the ZigBee network they are also directly transmitted to the security corps by an SMS alarm with the GPRS radio or event directly sent to the Internet via a TCP/IP socket.

Along with the value extracted from the Geiger counter, Waspmote adds also the GPS information (latitude, longitude) in order to give the exact location of the radiation source.

There are three types or radioactive particles, Alpha, Beta and Gamma which are generated in the nuclear power plants. 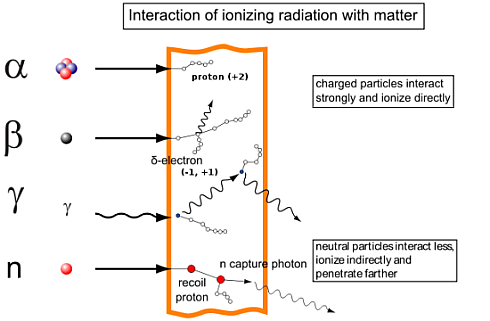 Alpha:
Alpha radiation consists of positively (+2) charged particles emitted from the nucleus of an atom in the process of decay.  These particles are also very dense which, with their strong positive charge, precludes them from penetrating more than an inch of air or a sheet of paper.  Because of this, Alpha particles are not a serious health hazard, except when they are emitted from within the body as a result of ingestion, for instance, when their high energy poses an extreme hazard to sensitive living tissue.
A weak form of ionizing radiation detectable on some models of Geiger counters, typically those that incorporate a thin mica window at one end of the Geiger -Mueller tube.

Beta:
Beta radiation consists of negatively charged (-1) particles emitted from an atom in the process of decay.  These particles are relatively light and can penetrate somewhat better than an Alpha particle, though still only through a few millimetres of aluminium at best.  If ingested, Beta radiation can be hazardous to living tissue. A relatively weak form of ionizing radiation detectable on many Geiger counters, generally dependent on the thickness of the Geiger-Mueller tube wall or the existence of a window at the end of the tube.

Gamma:
Gamma radiation represents one extreme of the electromagnetic spectrum, particularly that radiation with the highest frequency and shortest wavelength.  (That  same spectrum also includes the more familiar X-rays, ultraviolet light, visible light, infrared rays, microwaves, and radio waves, listed in order of decreasing frequency and increasing wavelength from Gamma rays.)  Gamma rays can pass through virtually anything, and are effectively shielded or absorbed only by materials of high atomic weight such as lead. Gamma rays are produced naturally by the sun and other bodies in outer space, their transmission to earth being known as “cosmic radiation”. A very powerful and potentially  very dangerous type of ionizing radiation detectable on virtually all Geiger counters. 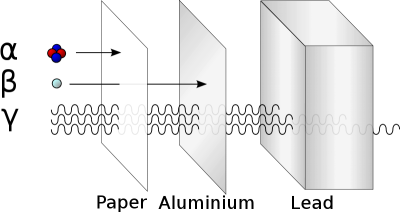 Background radiation:
Certain minerals that make up part of the earth containing the radioactive elements Uranium and/or Thorium also emit Gamma rays.  This, along with the cosmic radiation (Gamma rays which come from the sun and other stars), combine to produce the “background count” of a Geiger counter.   This might typically be in the range of 15 to 60 counts per minute, but will vary depending upon your location on the earth, your altitude, and the efficiency of the Geiger counter.  The background count should always be factored in or “subtracted” from the overall reading derived from a specific radioactive source.

In the video the sensor board is tested using Vaseline Glass which has been previously highly charged using ultraviolet light. This radioactivity level lasts only a couple of minutes but is enough to see how the irradiated Beta and Gamma particles are detected.

Particles detected by the Radiation Sensor Board

The Geiger tube integrated in the Radiation Sensor Board is sensible to Beta and Gamma particles as they can be detected in a ommnidirectional way. This means that no matter the orientation of the Geiger sensor respect from the source of radioactivity, just the distance. For this reason we ensure that setting the nodes in the right places is the key in order to detect a possible leakage from the Nuclear Power plant.

From counts per minute to Servants

The unit measure by the Geiger Tubes are basically the number of pulses generated. This means that in  one second we will have “n” counts (counts per second – cps) and in 1 minute the counts per minute (cpm). This value is common for all the Geiger Tubes, however, it is not an energy value but just the number of pulses. In order to get the real energy irradiated and the amount that is absorbed by a body we need to get how many Sieverts per hour are producing these pulses.

The formula which passes from cpm to Sieverts depends mostly on the Geiger Tube: the size, the shape, the material, the sensibility, the dead time, the type of particle measured, etc. Normally a conversion factor can be extracted from the charts provided by the manufacturer in the calibration process:

The first serie is already out of stock as it has been shipped directly at no charge to some working groups in Japan. If you are interested please make the preorder as soon as possible to ensure the disponibility in the second batch.

You can get just the Radiation Sensor Board in order to integrate your own Geiger tubes or buy it in a “ready to use” pack along with the Geiger tube already soldered.