Libelium hosted the third edition of its Annual IoT Conference. On the 21st and 22nd June 2018, the company welcomed more than 100 attendees from more than 20 countries of all continents to enjoy a great variety of conferences given by partners, customers and collaborators. The conference included several working sessions in which specialists showcased the latest IoT technology applications in two key areas: environmental sustainability and the urban environment. Participants discovered the most innovative projects in precision agriculture, intelligent water management, environmental monitoring of air quality, noise pollution and intelligent parking management.

The event program included the participation of international representatives of renowned multinational technology companies such as Ericsson, Vodafone, Arrow and Schreder, as well as others specialized in specific vertical solutions for improving productivity in vineyards, noise control in airports, water quality monitoring in Asian fish farms and the management of public parking spaces in shopping malls and cities. 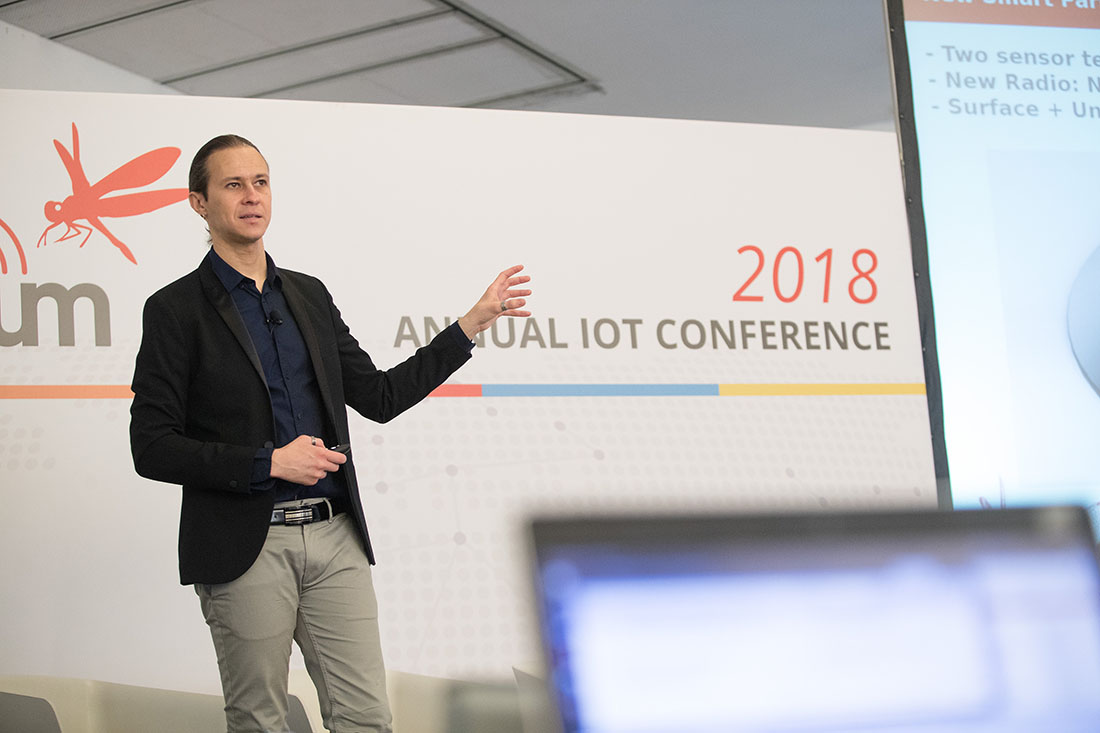 The sessions were opened by David Gascón, CTO and co-founder of Libelium, who remarked the effort Libelium has made in the last 12 years in the field of IoT and focused his speech in the current and future position of Libelium in the sector, revealing the latest trends in the IoT technology market in which many telecommunication companies, device manufacturers, software developers and cloud platforms operate. “Where are we and we are going?” stated Gascón, who also shared Libelium’s short-term plans with the attendees: “As the IoT is expanding it’s connectivity and cloud possibilities, Libelium is going to integrate all choices into just one and only Libelium cloud gateway. The objective is to connect as many clouds and databases as possible”.

The first roundtable focused in the Internet of Things for sustainability, with emphasis in the Smart Water Solutions. Javier Gabás, moderator of the table, started the session highlighting the fact that “only 0.3% of the water in the world is fresh water. A scarce resource which needs to be really cared and controlled”. The participants Asier González from A-Cing, Rob Moore from Aridea and Mojtaba Mirjafari from ASM, showed different real Smart Water projects which had been implemented using Libelium technology and debate about the different possibilities that can be found in the market. The American company Aridea is specialist in extreme Smart Water related projects, such as preserving endangered freshwater mussels in the Ohio River or controlling the effects of oil and gas-pipes in whales’ habitat in the Alaskan coast. 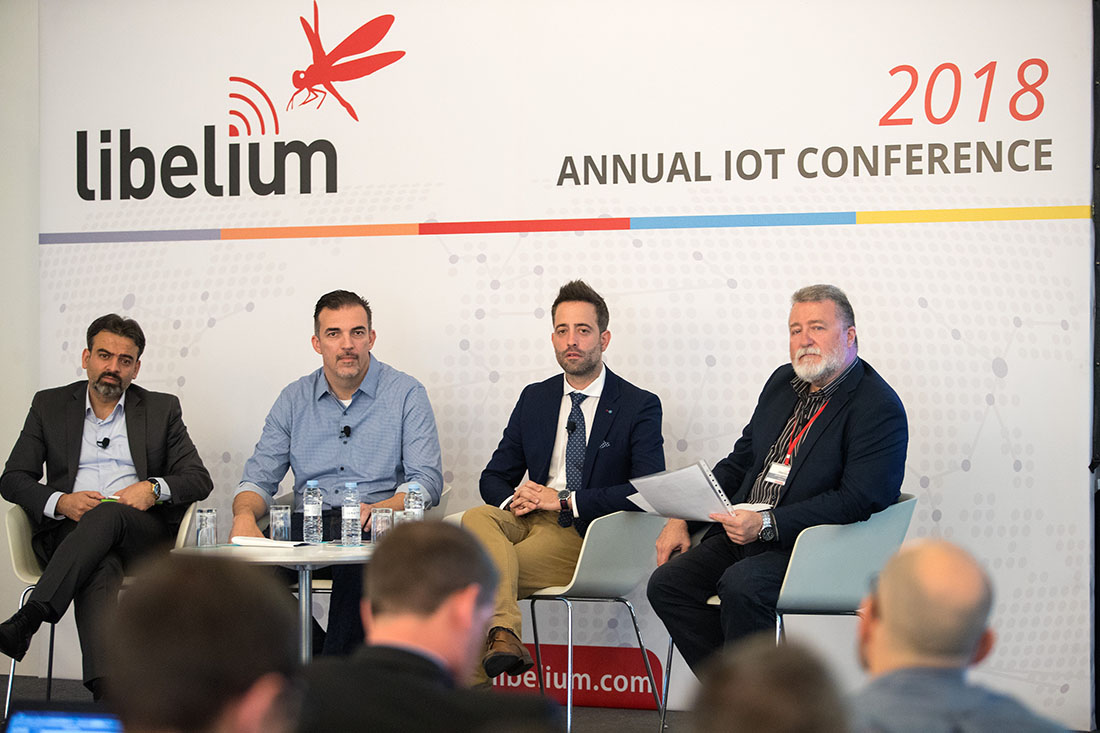 The second session was composed by Davide Parisi (Evja), Matic Serc (Elmitel) and Joey Bernal (SensorInsight) who discussed about how IoT can add value to the agriculture. “There is no one-solution-fits-all in the IoT and there are new improvements and products all the time. IoT is directly affecting how agriculture currently works. We are in constant evolution”, concluded Serc. Elmitel, which also received the “Best Partner in the IoT Marketplace Libelium Award”, detailed their latest implementations in the field of agriculture precision as well. 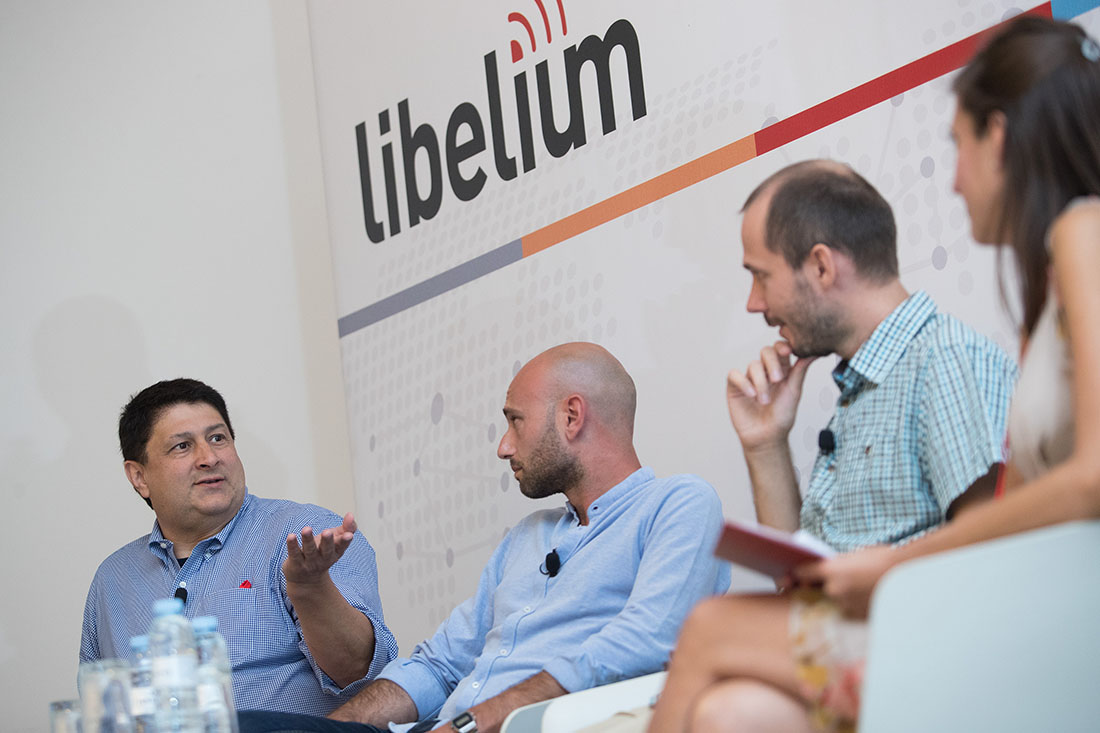 Libelium’s technological platform is committed to the interoperability of different sensors that allow the measurement of any parameter through any wireless communication protocol and send the recorded data to multiple cloud platforms. This is the reason why one of the most expected sessions was the “Interoperability for the IoT” round table. Professionals from the most important companies in the area agreed that “Interoperability is the key and Libelium has a really important role in that equation”, as highlighted Regina Andersson from Ericsson. The session was also participated by Daniel Barrallat (Vodafone) and Julian Studer (Loriot), who declared: “The journey is long. There is no best technology. There is the right technology for every specific use case”. 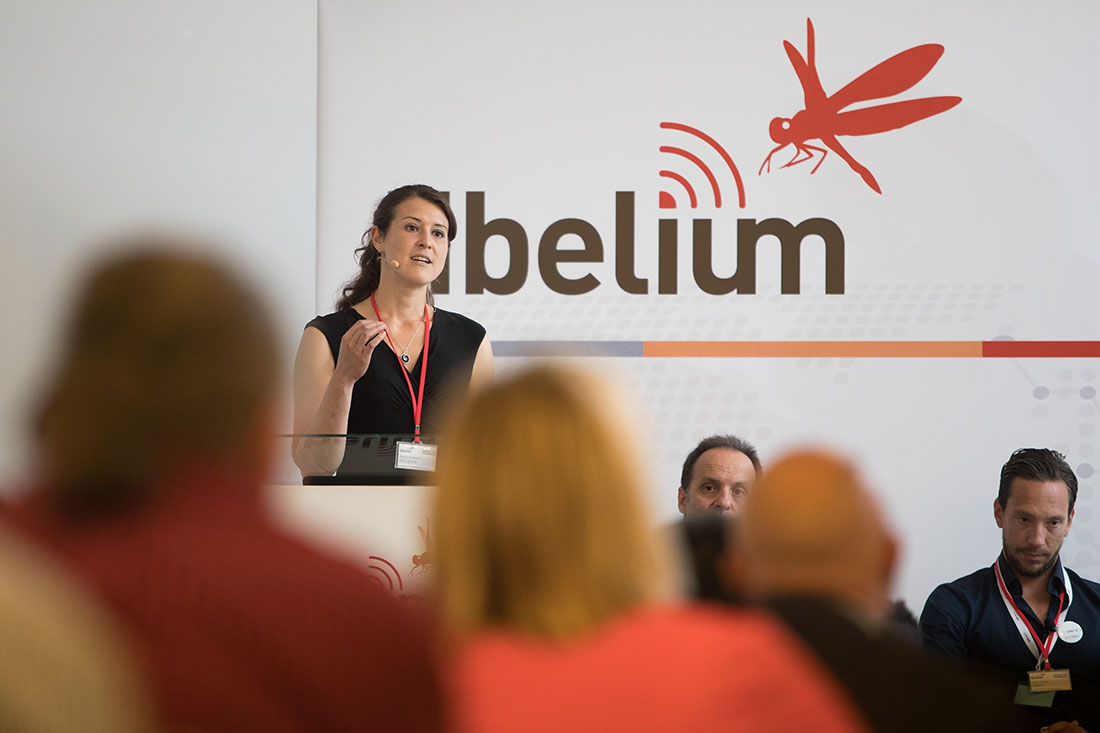 The last day of the Libelium IoT Conference closed with two complementary sessions about Internet of Things applied in Urban Life, more commonly known as Smart Cities. Carlos Gómez-Centurión explained how Arrow Spain implemented a Smart Parking proof of concept in their facilities using Libelium technology and how this project has improved their daily life. Jamie Donald (Axis Communications) and Manolis Nikiforakis (Ex Machina) agreed that the IoT is pushing the boundaries of what thought possible through monitoring and analyzing data. One of the new currencies in the world. The more accurate and transparent data the better. 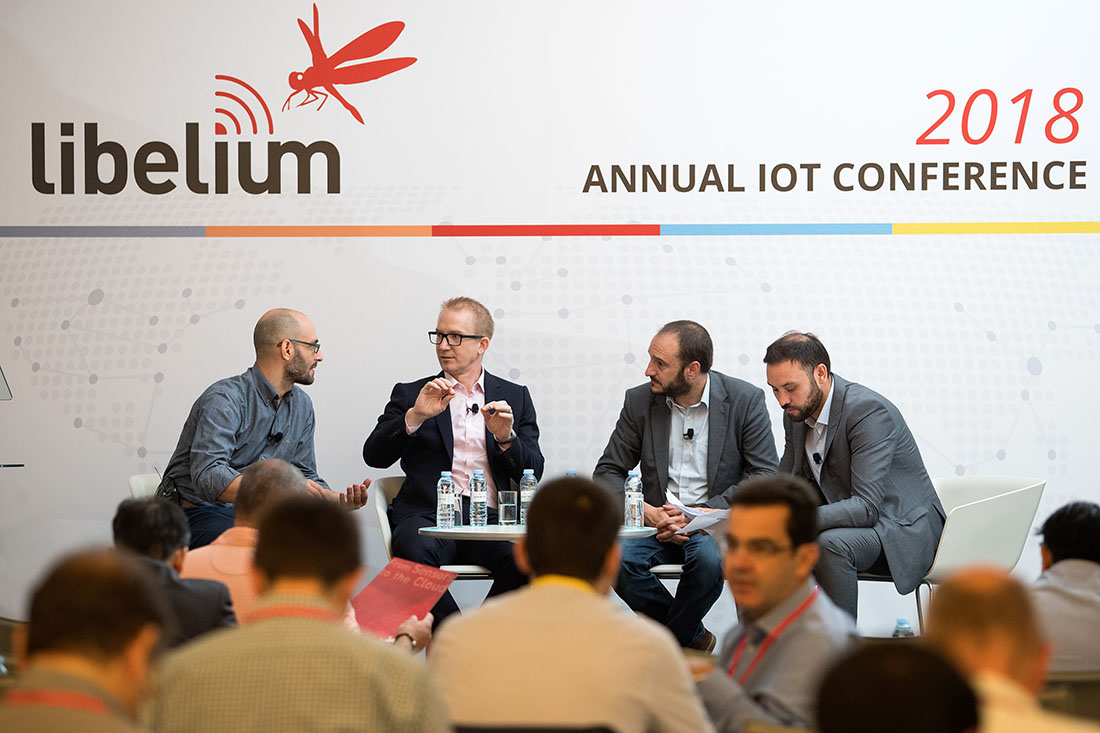 Ex Machina developed a project at Athens Airport, a deployment which brought the administration great advantages thanks to noise and environmental data obtained. Noise sensors were installed along the airport to trace the noise of planes during their take-off. “Intersection take-off detection deployment” helps to create statistics on take-off characteristics. “IoT becomes more valuable when you combine different and complementary solutions, that is why we created the “FaaS – Forecast as a Service” based on IoT and machine learning”, says Nikiforakis. 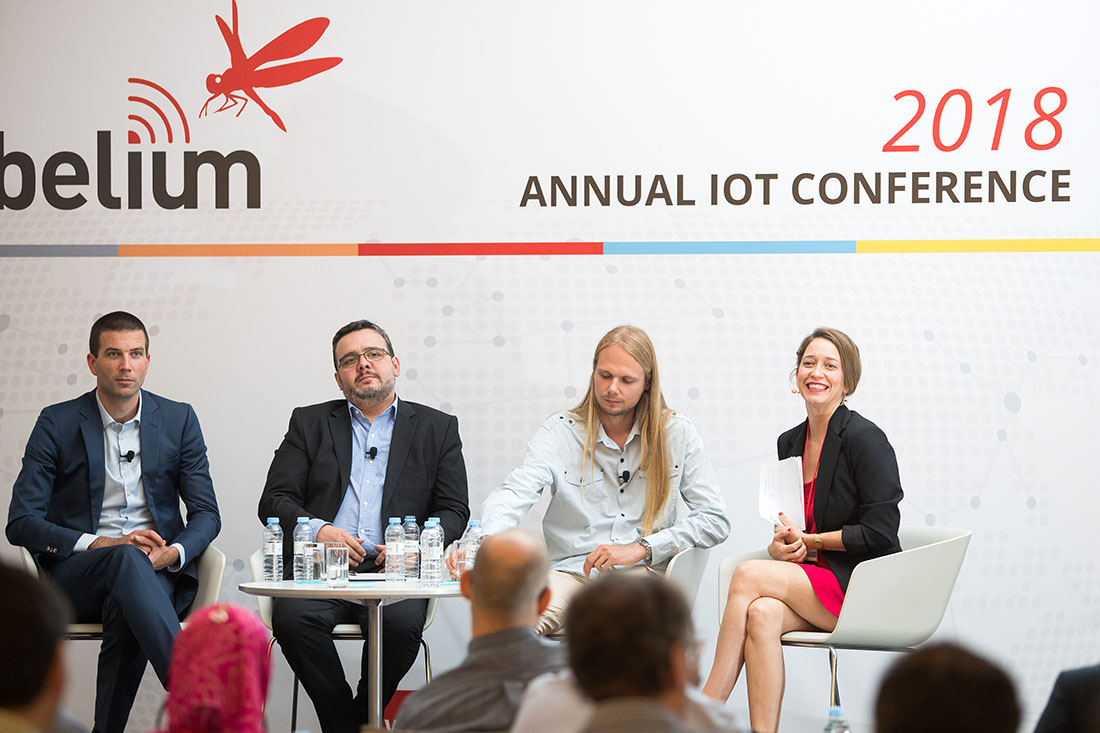 Michal Chilinski (Feature Forest), Alexandre Ferrete (Gill Instruments) and Gérald Olivier (Schréder), all participants in the last round table of the Libelium Annual IoT Conference concluded that there is an imperative need to partner, to connect all IoT solutions to achieve new solutions to the cities. “We need to speak the same language, we need to be compatible”, concluded Olivier.

Libelium’s technological platform is committed to the interoperability of different sensors that allow the measurement of any parameter through any wireless communication protocol and send the recorded data to multiple cloud platforms. In this way, the ecosystem of collaborating companies and alliances that Libelium has reached in recent years provide compatibility with large companies such as Microsoft, IBM, Indra, Telefónica, NEC, Ericsson and Telnet, among many others. 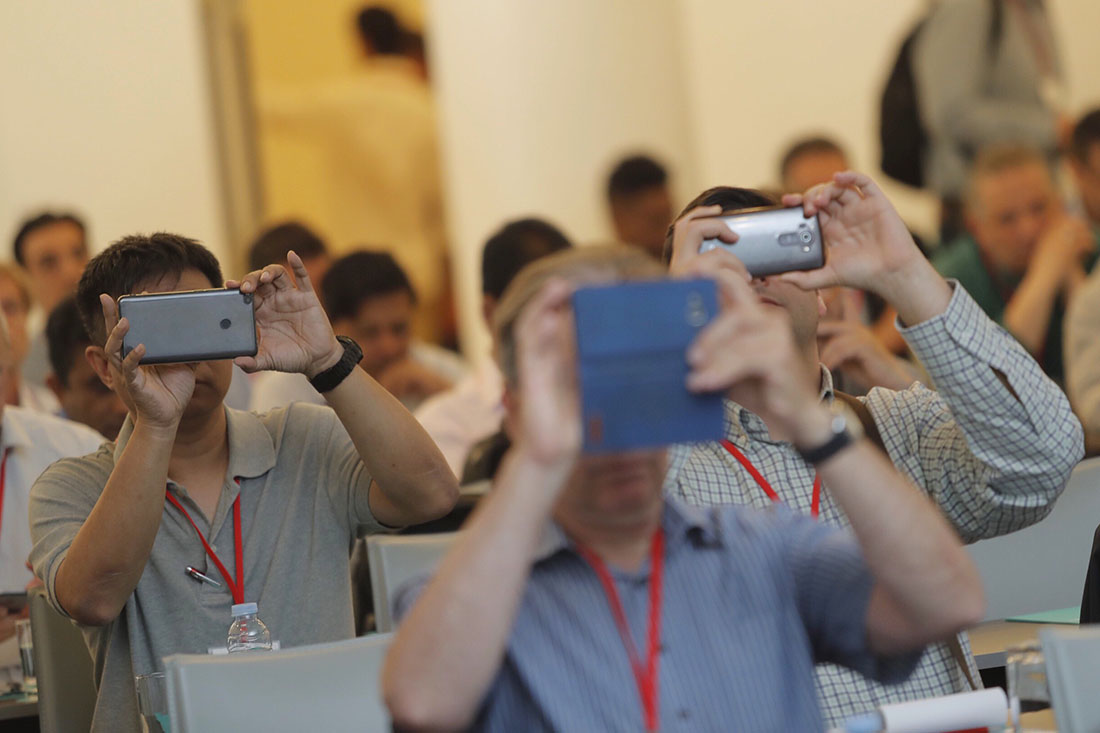 Assistants at the Libelium IoT Conference 2018

The assistants remarked the high level of all presentations and speakers as well as the good work made by Libelium, which has organized “one of the most high quality event about IoT in the current panorama”.