Smart Cities: sensor cities that interact with us in a smart way

The concept of city is changing as we knew it. The new technologies transform the cities into an entity capable of intelligently manage the water used to irrigate parks and gardens, measuring the amount of contamination in the air, or even generate alerts according to the level of dangerousness of the solar rays.

Optimizing the amount of water used in irrigation of parks and gardens, managing the lighting in a smart way, providing an information system of free parking spaces or water leaks in pipes are problems common to most cities: they all could be treated with an intelligent monitoring system that would help in the daily management of resources.

The cities of the XXI century

The main idea behind any monitoring system in a city is to optimize decisions through data collection, interaction with citizens and coordination between services with the aim of making cities better places to live.

The first front that can be attacked with the installation of sensor networks in cities is the environment protection. Environmental data gathering aims a double purpose. On the one hand, monitor pollution levels may be used as a reference point in order to start public awareness campaigns. For example, showing the levels of NO2 and CO2 emitted by vehicles before and after a campaign “Don’t take your car, use public transport”, helps citizens to understand the environmental impact of their actions. On the other hand, the fact of knowing these levels can lead the decissions such as tolls on congested areas by traffic, as it has been done in cities like London, Stockholm, Brisbane and Singapore. Another possible application is to create noise maps using microphones in the sensor devices to identify areas of noise pollution. Finally, we must not forget the optimization of water resources. Long periods of drought caused by climate change make it ever increasing important to save every drop of water. The 60% of global water withdrawals are for irrigation and 20-30% out of this percentage is wasted through evaporation by watering in hours of high temperatures or by over-watering when the soil is no longer accepting more water. The measurement of humidity and temperature can assess optimal times for irrigation, when the chances of evaporation are lower, while the monitoring of soil moisture can turn off the irrigation systems when the water supply is enough. 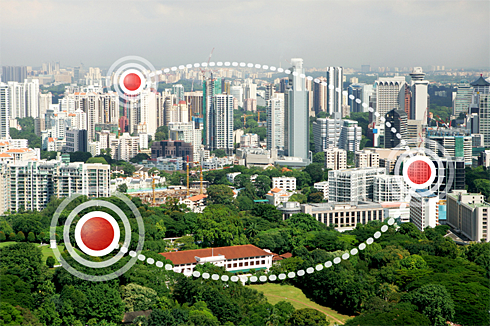 The examples above have a clear focus not only on improving the environment in the city, but also in reduction of economic costs for municipalities. In this line, we could add as an example the management of public lighting with light sensors, that would optimize and adapt the operation of urban lighting systems based on daylight hours, or optimization of waste collection routes according to weight and volume data collected by the sensors in the containers.

Finally, sensor networks can create new services to offer to citizens. Can you imagine receiving a text message with the location of the nearest parking space? Monitoring the status of parking spaces would not only provide this service (a valuable service for those who must dirve on the center of large cities) and could also use the information on payment systems. Those cities with beaches or pools may offer a protective service informing citizens of the days and hours when the sun is more harmful for helping in the prevention of skin cancer.

Sensor networks allow monitoring of any environment that seems inaccessible and hidden. They consist of a group of small electronic devices that capture data from outside via sensors, processes these data and generate and send alerts wirelessly. The name given to this type of device is “mote”, from the phrase “mote of dust”, with the idea of conveying two main concepts in just one word: their small size and the idea that they can be placed anywhere.

The motes have the ability to communicate with each other through the creation of mesh networks using the ZigBee protocol and retransmit the information through the network to a control point to record the observed values and even make decisions accordingly. These motes are automatically organized periodically to see the best routes of communication. This allows the motes to change place to monitor a different area at a given time.

The ZigBee protocol works in the same frequency band as the popular Wi-Fi and communication using it is completely free without any license purchase. Without this, it would be impossible to cover a complete monitoring of large areas in which there may be hundreds or even thousands of devices.

The main features of this type of networks are:

Up tp date, the monitoring systems available in the cities are monoparameter and costly, both in materials and deployment. This means that in most cases the samples are not significant nor sufficient for making decisions. The characteristics of sensor networks make the technology of sensor networks effective, reliable and inexpensive to monitor hundreds or even thousands of devices.

Libelium is a company dedicated to the development of hardware for implementing wireless sensor networks and mesh networks. Currently working with several companies in the development of projects in the field of intelligent sensory cities within and outside Spain, using the mote Waspmote. It is the only Spanish company that designs their own motes for general purpose applications and has been awarded up to 14 times, both nationally and internationally for its technology. 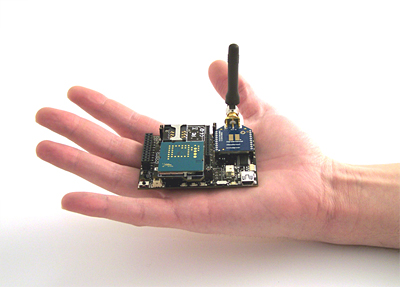 Waspmote design was made thinking about the challenges of large-scale installations, such as cities. Each mote can contain up to 8 different sensors, so the same sensor device can be used to provide different services. It is completely modular, allowing the choice of radios with ranges from 300m to 12Km and accessories such as GPS geolocation, access to wireless telephony networks via GPRS or to mobile devices via Bluetooth. It operates totally independently powered by batteries (similar to the ones of a mobile phone) that can be recharged via solar panels, so that it may be operating for years without maintenance costs. More than 50 different sensors, such as humidity, temperature, radiation, bending, infrared, various gas-specific sensors and even agriculture, as dendrometers, have been integrated to allow the development of any type of application. Finally, it is ease of integration into other systems helps other companies when deploying monitoring projects fully customized for end-users. 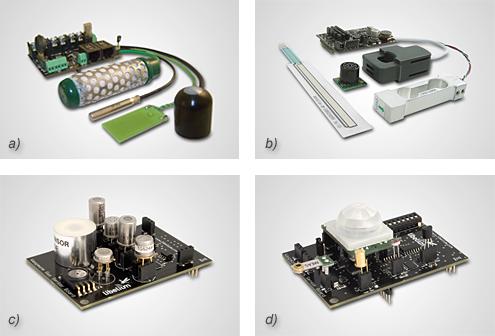 For the first time the technology needed to deploy and cover this type of projects fully ready. Apart from the availability of technology, there are two factors that are encouraging the development of such projects from the government. On the one hand, climate change is forcing many governments and public institutions to take action against the media and public pressure. Furthermore, the present crisis is encouraging investment in public works such as revitalizing the economy and the city sensorization projects are part of the investments of many municipalities. However, implementing measures to reduce pollution or the water used for irrigation is not enough if you do not have resources to measure their impact and show transparently to the citizens its success or failure. As an example, we could cite the decisions of some municipalities to slow traffic at the city entrances. The fact of not having a historical database to show the reduction of CO2 emissions means that many people doubt its effectiveness and consider it as a merely revenue-raising measure. To take action in improving the environment is essential to monitor it properly and assess the impact of measures taken.

For example, monitoring of pollution in Stockholm had his people in a referendum to approve a congestion tax for access to downtown. The results were a 22% reduction in CO2 emissions and 18% reduction in the average time of traffic jams. The latter is especially important if we consider that congestion generates a 100,000 million losses per year in the European Union. Other cities such as London, Brisbane and Singapore have adopted similar measures.

Smart Cities are ambitious projects that aim to interconnect city elements with citizens to create a more livable space.

If you have any doubt about how to monitor the parameters mentioned in this article with Waspmote, do not hesitate to contact us asking for support.